We are a school with a difference, which aims to provide quality education and creative thinking
Board
ICSE
Medium
English
Location
Teynampet
Facilities
Enquire with school
You may also be interested in other schools of Chennai. 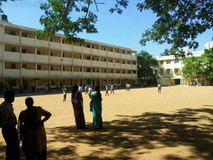